24 HOUR BOX OFFICE – 0844 478 0898
BOOK ONLINE – www.thegigcartel.com
FEATURING SONGS FROM THE NEW ALBUM
“BRIDGE THE GAP” PLUS ALL THE MSG, UFO
AND THE SCORPIONS ROCK CLASSICS 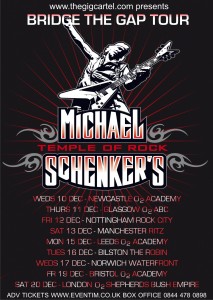 The award-winning, legendary guitarist Michael Schenker will embark on a nationwide UK tour at the Newcastle O2 Academy from 10th December. Tickets are available from the 24 hour box office 0844 478 0898 or from www.thegigcartel.com.

Schenker will perform tracks from his current studio album “Bridge The Gap” which features the new single “Lord Of The Lost And Lonely”.

Scottish vocalist Doogie White, who co-wrote the album with Schenker, soars across every song, and stamps his enthusiastic personality with every note and phrase. Wayne Findlayadds another dimension to the dynamic, classic Schenker sound with his Dean 7 string guitar and keyboard orchestrations.

Bridge the Gap is a thunderous, explosive collection of brand new songs steeped in shades of dark and light. Musically and lyrically, the new album shows a re-energised guitarist at the top of his game, surrounded by top drawer musicians. 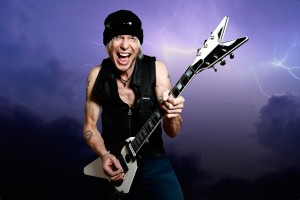 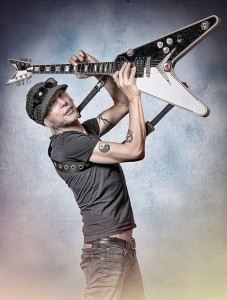 The new LP includes thirteen adrenalin-fuelled melodic rock’n’roll songs that showcase Schenker’s distinctive and explosive guitar playing, valiantly underpinned by the ferocious rhythm section of Rarebell and Buchholz, marking the first time Schenker, Rarebell and Buchholz have appeared on the same album since the Scorpions’ 1979 Lovedrive.

Vocalist Doogie White, who co-wrote the album with Schenker, soars across every song, and stamps his enthusiastic personality with every note.  Wayne Findlay adds another dimension to the dynamic, classic Schenker sound with his Dean 7 string guitar and keyboard orchestrations.

Bridge the Gap is a thunderous, explosive collection of brand new songs steeped in shades of dark and light.  Musically and lyrically, the new album shows a re-energised guitarist at the top of his game, surrounded by top drawer musicians. 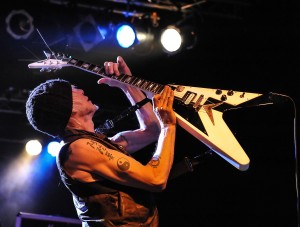 The album, recorded at Kidroom Studios, Germany, was produced by Schenker and co-produced and engineered by Michael Voss.

“I sent material to Doogie in the New Year and he started writing melodies and lyrics,” says Schenker.  There was a lot of energy flying about during the recording process. I had the same drive making this album as I had when I was 16.  I wanted it fast, heavy and melodic.  It felt like bridging the gap from my teenage and Lovedrive years to what I am doing now.  I’m back to where I was a long time ago and I love it.”

“Never having really written with Michael before, apart from When the Devil Knows You’reDead (from 2011’s Temple of Rock album), I didn’t know how flexible he would be writing wise,” recalls Doogie.”  I recorded some vocal tracks as ideas and when Michael heard them we were off and running.  Within two weeks we were in the studio laying down tracks.” 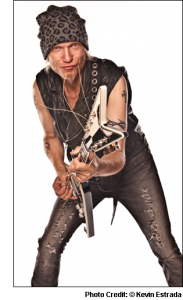 Schenker admits that when he wrote this album, he tried to get a balance between songs that are heavy, fast and melodic, complimented by his signature guitar solos.

“I wanted to combine the old with the new,” says Schenker. “That’s why the album’s calledBridge The Gap.  With Wayne playing 7 string guitar we created some low, heavy modern sounds.  Since I play and experiment on a regular basis, I always have some new, fresh sparks to share when I record a new album.  I am inspired from within.  It’s infinite like a kaleidoscope.”

“As former members of the Scorpions, Herman, Francis and I have been out of the loop of rock’n’roll for quite a while.  Getting together for the first time since theLovedrive album is an incredible jump. We’re connecting the past with the present. We’re bridging the gap.”

Schenker remains philosophical about the name of the new album.  He believes the name reflects what is going on in the fast-moving world around him.

“Everything that is currently going on in this world is showing that people are desperate for change. We need to bridge the gap of poverty. There are too many innocent people getting killed in terrorist attacks. We need to leave all of this chaos behind us.  We have to be strong. We have to continue moving forward, working together in a balanced way.”

Schenker is amazed how melodic the new album turned out, but he still insists the songs still feature a bit of darkness as well.

“I came up with the name of the album, before I even started writing. When Doogie started writing the lyrics to the new songs he had something to go by.”

1. NEPTUNE RISING
2. WHERE THE WILD WINDS BLOW
3. HORIZONS
4. LORD OF THE LOST AND LONELY
5. ROCK’N’ROLL SYMPHONY
6. TO LIVE FOR THE KING
7. LAND OF THUNDER
8. TEMPLE OF THE HOLY
9. SHINE ON
10. BRIDGES WE HAVE BURNED
11. BECAUSE YOU LIED
12. BLACK MOON RISING
13. DANCE FOR THE PIPER
14. FAITH (VOCALS: DON DOKKEN) (BONUS TRACK)
All songs produced by:
Michael Schenker and Michael Voss
All songs are written by:
Music – Michael Schenker
Lyrics – Doogie White
Except: ‘Neptune Rising’ (Michael Schenker)
Bonus track “Faith” appears on the Special Edition,
featuring Don Dokken (vocals) 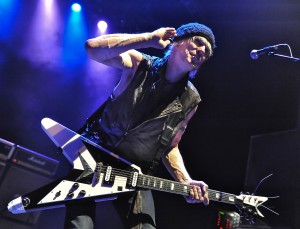 Michael Schenker and Herman Rarebell met on and off over the years and eventually decided to do something together.  Schenker hadn’t performed UFO material for a while, and decided to put a touring project together with Best of Michael Schenker material.  Pete Way showed up at one of Schenker’s MSG Shows and appeared to be in good spirit, and was invited to Brighton to jam together. At the same time, Schenker was about ready to start working on a new album. He went to a studio in Muenster to record a demo. Michael Voss was engineering and laid down guide vocals.

Schenker liked his voice and asked Voss if he wanted to do the singing.  When Schenker finished the demo he played it to Pete and Herman. They liked what they heard and immediately offered to become the rhythm section. The result was 2011’s “Temple Of Rock” album which featured guest musicians including Star Trek’s Captain Kirk (William Shatner) who recorded the spoken word intro on the album.  Schenker ended up playing on Shatner’s solo album. Vocalist Doogie White also appeared on the album. Schenker wrote a song specially suited for Doogie’s vocals – “Before The Devil Knows You’re Dead”.

The song became a favourite on the album and was A-listed on Planet Rock radio in the UK. When it was time for Schenker to go on tour, Michael Voss wasn’t available, so he had to find a replacement. 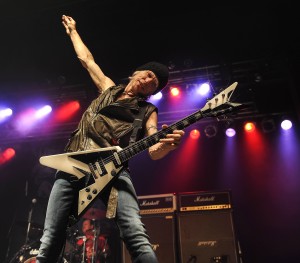 The song became a favourite on the album and was A-listed on Planet Rock radio in the UK. When it was time for Schenker to go on tour, Michael Voss wasn’t available, so he had to find a replacement.

When Schenker was getting ready for the European tour, he learned that Pete Way was not well so he asked Herman Rarebell what Francis Buchholz was up to due to the fact that Schenker performed several Scorpions songs in his set.  Francis was happy to join for our European tour with Doogie on vocals and Wayne Findlay on guitar and keyboards. The tour was so successful that Schenker decided to film one of the concerts for a live DVD.  The band got stronger and stronger and completed their European tour, but more offers were coming in to perform additional gigs.

Schenker seized the opportunity to record an album after the end of the first leg of their European tour. There was a six month window. Doogie was ready to go for it and so was the rest of the band. Schenker started laying down tracks and gave the material to Doogie so he could start writing the lyrics. Off they went recording with Michael Voss as their engineer/ co-producer. Everything went like clockwork and was finished before the set off to tour Russia in April 2013.

The band toured for another three months in Europe and grew stronger. After finishing the second part of the tour, they got back together and remixed and re-mastered the album.  Entitled “Bridge The Gap”, the album will be released December 2nd 2013.  In 2014, Michael Schenker’s Temple of Rock will embark on a North American tour. “We’re ready to rock,” says Schenker. 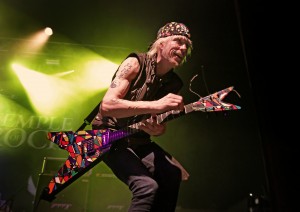